Welcome to the Official Attendee Housing Site for the Influenza-2016, which will be held in the beautiful and exciting city of Berlin. The conference will take place in the following dates and location: Golden Tulip Berlin Hotel Hamburg
Landgrafenstraße 4, 10787 Berlin,
Germany Phone +49 30 26 477 186 FAX +49 30 26 477 185

Get on A113 from Am Seegraben/B96a then follow A113 and A100 to Sachsendamm/B1 in Berlin. At the 18-Kreuz Schöneberg junction, Use the right lane to follow signs for A103/B1 towards Tiergarten/Sachsendamm and continue on B1 and then take Martin-Luther-Straße to Landgrafenstraße Berlin is the capital of Germany, and one of the 16 states of Germany with a population of 3.5 million people and is Germany's largest city. It is the second most populous city proper and the seventh most populous urban area in the European Union. Located in north-eastern Germany on the banks of Rivers Spree and Havel, it is the centre of the Berlin-Brandenburg Metropolitan Region, which has about six million residents from over 180 nations. Due to its location in the European Plain, Berlin is influenced by a temperate seasonal climate. Around one-third of the city's area is composed of forests, parks, gardens, rivers and lakes.

Berlin is a world city of culture, politics, media, and science. Its economy is based on high-tech firms and the service sector, encompassing a diverse range of creative industries, research facilities, media corporations, and convention venues. Berlin serves as a continental hub for air and rail traffic and has a highly complex public transportation network. The metropolis is a popular tourist destination. Significant industries also include IT, pharmaceuticals, biomedical engineering, clean tech, biotechnology, construction, and electronics.

Berlin has become the third most visited city destination in Europe. Berlin, Germany’s capital and cultural centre, dates to the 13th century. Today it's known for its art scene, nightlife and modern architecture, such as Mies van der Rohe’s landmark Neue Nationalgalerie. As of 2011 Berlin is home to 138 museums and more than 400 art galleries. The ensemble on the Museum Island is a UNESCO World Heritage Site and is situated in the northern part of the Spree Island between the Spree and the Kupfergraben. Berlin's nightlife is one of the most diverse and vibrant of its kind in Europe. The major attractions of the city are Reichstag, Berlin Wall, Charlottenburg Palace, Kaiser Wilhelm Gedächtniskirche and Berlin Cathedral.

The metropolis is a popular tourist destination. Significant industries also include IT, pharmaceuticals, biomedical engineering, clean tech, biotechnology, construction, and electronics.Germany doesn't just have an incremental approach to renewable energy, but a commitment supported by 84 % of residents to get to 100% renewable energy "as quickly as possible." Modern Berlin is home to renowned universities, orchestras, museums, entertainment venues, and is host to many sporting events. Its urban setting has made it a sought-after location for international film productions. The city is well known for its festivals, diverse architecture, nightlife, contemporary arts, and a high quality of living. Over the last decade Berlin has seen the upcoming of a cosmopolitan entrepreneurial scene. 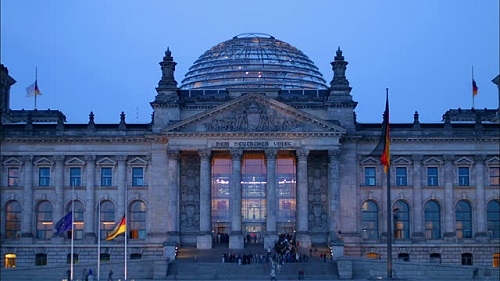